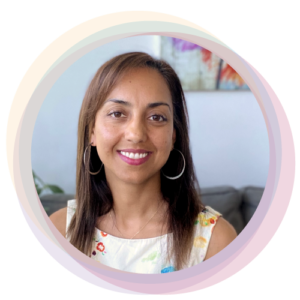 “I am brought to earth to do this work…”

When life messages get so loud you have no choice but to listen, then once you experience the ease and grace it’s easier to go with the flow.

The power of words, thoughts and actions can have a subtle yet powerful impact on others’ life. After losing my father at a young age and hearing people around tell me how I “shouldn’t disgrace the family name”, and how I “should be mindful, considerate, and have empathy for my mother for losing her husband so suddenly”, the words still echo, “be a good girl, listen to your mother” – this was the first of many rocks that I started collecting for my new backpack of life.

My mother was now a widow with young children. She had huge responsibilities in life – raising a large family and fulfilling big commitments instilled in her by cultural, religious, social and economic standards.

The thought and intention of being a good girl, listening to my mother, and not bringing any disgrace to the family name was deeply ingrained in my sibling and me; it became part of who we were as a family and also defined our identity. For me, with the loss of my father, the patriarchal system had failed on one level. However, it continued to live strongly through my mother’s values, beliefs and biases.

(Deeply buried rock in the bottom of the backpack)

Ten years later, many decisions I made were based on social standards. Despite the circumstances I was raised in, I exceeded expectations and utilized opportunities presented before me. We all looked great on the outside, living accomplished, successful, happy, intelligent and independent lives, while obeying family rules, social regulations and societal norms.

Ten more years later, I began to reflect and internalize what my life was showing me because my inner self began to reflect my outer self, and that life was not a reflection of what I was promised by society, the patriarchal system, culture and religion. The ease of life, feeling joyful, tranquil, fulfilled and abundant wasn’t showing up. It began to affect my behaviour, thoughts and actions; the way I’d talk to myself didn’t match how I’d communicate with others. My internal dialogue would then go into overdrive and review the stories in a negative light. What does it mean to be bad? Why didn’t I get all that was promised for being good? Did I shame and dishonour the family? Was it because I was not loyal to my family in any way?

I was hurting – emotionally, spiritually and physically. My body showed me signs of dis-ease through physical aches, pains, illnesses, etc. My physical body was screaming for my attention on account of the emotional pain.

That was when I decided to open ‘the backpack’. It took courage to go inwards, be objective and look at my childhood and my loved ones (mother, sisters, brothers, friends, mentors, teachers, etc.) who shaped me into the person I am today.

“I was hurting – emotionally, spiritually and physically. My body showed me signs of dis-ease through physical aches, pains, illnesses, etc. My physical body was screaming for my attention on account of the emotional pain.”

As I delved deeper into my backpack, way underneath, I found various rocks buried. These were the ones that I’d been carrying around for decades, ones that I wasn’t ready to confront before, and some others that were perhaps, camouflaged.

It wasn’t until I dug into the depths that I recognized how the rocks in my bag were deviating me in the direction of life, and leading me to a path that I had no desire to pursue.

I also identified how some of the rocks weren’t mine; they felt like me, they looked like me and even behaved like me, yet they were not mine.  They belonged to others – the ones with subtle background voices and the ones who projected their ideas on to me (perhaps with good intentions, but only from their perspective of upbringing and life experiences). It was somewhat easier to unload the emotional rocks when I associated them with aunts, uncles, cousins, distant friends and colleagues, etc. However, it was different when it came to my immediate family –  my mother, sisters and brothers.

I was confused when I realized that I was carrying many of my mother’s rocks:

The feeling of being less-than – for being a widow with many children at a young age;

Losing her power, position and strength for not having a man standing by her;

The guilt for not being good enough to each of us;

Feeling like she’s struggling to survive and provide a balanced home;

Her honour and integrity (still striving for community respect under the patriarchal system) to fulfill her duty (instilled by religious and cultural values); and

The huge commitment as a mother of not having anything get in her way to fully provide for her children while adhering to the loyalty towards the religion and cultural heritage.

I claimed it all and had lived out many elements of these aspects in my own way.

Today, when I look back at how far I’ve come and reflected on some of my decisions, I began to see some of the deeply buried, camouflaged rocks in my backpack and could associate them with my life experiences and interpersonal relationships.

I’ve worked hard over the years to unload some of these rocks. At times, while my heart sank to see another rock, I also felt a massive sense of relief from unearthing something that I could identify and relate with some of the challenges that led me to where I am now.

I share this story not only to highlight how seemingly small experiences and subtle words from others can shape your life but to also showcase how others can be well-intended, sincere and honest, but the direction they propose may not be the one meant for you.

Removing the rocks from your backpack connected to someone as close as your mother (or another family member) can be painful yet essential for the growth of your soul.

Each one of us is here for a specific purpose and reason; we all bring unique gifts and qualities to elevate the experiences of our soul – called life and continue to live it for a greater purpose.

To share what I know, having lived many lifetimes on earth and on other planets, and knowing all the wisdom from those incarnations are available to me, here and now, to support, lead and guide you on your soul evolutionary journey with unconditional love.

Over the last 20+ years I have worked through doubting my decisions, feeling inferior from others, embarrassed and ashamed about who I’d become in life, impatient that life didn’t unfold as predicted by others, and worried about relationships, work and things that I couldn’t control. But it was ultimately fear that was holding me back – keeping me small and preventing me from healing and aligning with my soul.

I truly believe I have the right amount of compassion, understanding and wisdom to support you on your journey. The fulfilment I receive when guiding others feeds my soul and gives me a confirmation that this is indeed what I’m here to do. My purpose, passion and genuine desire is to re-connect you to your light, your soul and to help you be a bright shining light while on this beautiful planet.

Being true to my own power and soul-self is of paramount importance in who I am and in my work.

Dedication to pursuing my life purpose through passionately living with joy and peace.

Aligning choices with my highest and greatest good is vital in how I move through the world.

A force that powers my every move and directs me to magical places for healing and greater purpose.

Allowing the greater force of the universe to direct my soul journey knowing it’s all designed for my highest and greatest good.

I have spent over 20 years healing from my traumatic experiences. Life experiences took me down a healing path where I delved into many modalities to heal my past karmic lifetimes revealed in daily life.

During this process, I’ve learned about —

Naranjan believes in continuously learning and growing as a part of life; she embraces it fully. Her curiosity to learn is not only from a mental level but also bringing spirituality a harmonious balance.

Naranjan has aligned in partnerships and received recognition for her coaching and life skills experience.